“The rise of the ‘Ancient Waterkeepers‘ and their re-emergence in Wales at this time in the history of the World, may not be a fable.

There’s a flow in the air.
Trickles everywhere.
A ocean of support to clear plastics, clean beaches and have all rivers as green living corridors.

The World’s one Water Cycle is crystal clear but many of todays waterkeepers are mucking it up.

We hope the recent sightings of “Ancient Waterkeepers” in **Llandrindod Wells will encourage everyone to keep the physical water environment clean but we hope that these waterkeepers will also add to the spiritual well-being of the community.

It is wonderful that a group of ancient waterkeepers should spring up here in Wales, home of the equally wonderful  Centre for Alternative Technology  which continues to focus the World’s attention on present and future global eco-sustainable needs.

And perhaps the Ancient Waterkeepers at Llandrindod Wells will be able to focus the World on its water issues and re-introduce the respect that the Zoroastrians established for water long before it was bottled and pumped into our lives as a slave to our domestic and industrial demands.

“Water is precious, every drop.
Polluting it has got to STOP.”

SOMETHING EXCEPTIONAL IS AHEAD

The reservoir from which all thoughts emanate is perfectly in tune with the necessities of the universe and all that dwell in it.

Consequently, whenever necessary, that UNIVERSAL INBUILT SPIRIT will most definitely continue to rise up to correct any imbalance, as it has done successfully so many times in the past, since before the concept of infinity even existed.

Heed not the prophecies of doom for they are based entirely on the visible world and totally overlook the power of thought and the reservoir from which it flows.

As you so rightly point out, we must only enjoy “the hand that we have been dealt”. Be wise and accept it with a smile. The “cosmic joke” has been told in a universal language, for us all to share.

The one and only J.

MORE >   The Green Man. As illustrated by Paul Day 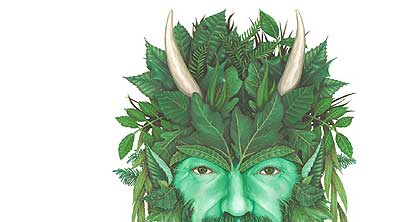 There are many places like ‘Llandrindod Wells’ with the word “Wells” after them.

Wells were once viewed as the “eye” of creation hence they originated water flows.

Many wells became “eye-wells” – their waters thought to be of great value to those with sore eyes. Even as recently as 1983, some of the well water from Llandrindod Wells was sent to Margaret Thatcher, the then British prime minister, to help with a speedy cure of her eye troubles.